My time in Ammarnus and Sweden was cut short.  I took a fall off Sitar in early June.  I got right back on and rode back to the stable and thought that was an end of it.  But a few days later it became clear there were problems.

So after a few days in the hospital in Lycksele I headed south to Motala where Magnus’ twin sister Maria and their family and Marianne, their mom live.  His older sister Malin and her husband Peter were there too, as was Magnus.  And Oscar, Magnus’ partner and our dear friend Tommy were there too!  So while it wasn’t how I had it planned, I was in wonderful company and my Swedish family stepped forward and took care of me.

The high point of the whole trip was seeing Peter, Malin’s husband who’s been through a terrible ordeal over the last 18 months.  He is recovering and the reunion was wonderful. 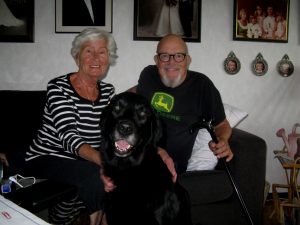 I stayed with Marianne and Sotis in Motala.  They were both great!  Sotis would wake me with his wet nose!

It finally became clear that getting back home on a regular tourist ticked was going to be a real problem.  But fortunately I had purchased supplemental medical insurance as well as evacuation insurance. 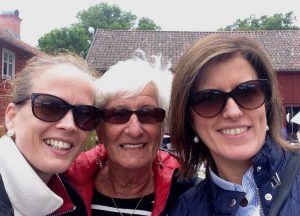 My dream team!  Maria, Marianne and Malin took on the insurance bureaucracy
and got me home!

So June 29th, I was picked up by a nurse who shepherded me right to my door in Port Townsend.

I’m recovering nicely (though not as fast as I’d like.)  Tuesday I start physical therapy,  I can now drive and have resumed my Port Townsend activities, including my volunteer work with Camp Beausite. 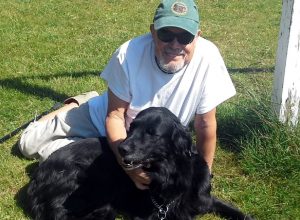 Sotis gives new meaning to:
“Just to stretch out on the grass again as you used to do, good to feel…good to touch…these are the things worth having.”  From Stravinsky’s ‘L’histoire du soldat’ – libretto by C.F. Ramuz
Posted in Uncategorized
← One month and counting