It’s all about horses…and politics. 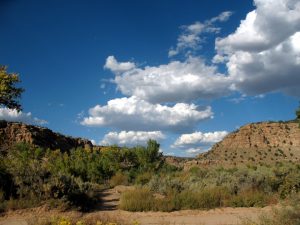 I decided to make this blog about mustangs and how they are controlled by the government.  There’s a lot of misinformation about the current government policies dealing with mustangs.

If you find this boring I hope you’ll enjoy the pictures.   And by the way, there is a video of me working with a mustang.  Click here to see it on YouTube.

Wild mustangs date back to horses that came from Europe starting with the Spanish invasion.  Some scholars also feel there may have been an indigenous strain that was here before the white man.  These horses are quite small and have a link to small horses still found in Greece.  By the time the West was being first explored and settled, wild horses roamed throughout North America.  Some Indian tribes were very dependent on horses and had deep respect for them. 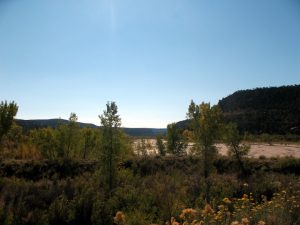 The dry riverbed near the ranch.

As North America became settled in the 18th and 19th century, wild horses lost much of their range land.  By the 20th century there were more horses than the range land could support.  Different reactions to this problem came to pass which has led to the current wild horse management which is under the National Forest Service (NFS), Bureau of Land Management (BLM) and to a degree the National Park Service and some state agencies. These agencies work based on guidelines established in1971.  Mustang herds were defined at that time and are protected by law.

The herds are located in Herd Management Areas (HMA) and have an ideal population which that land can environmentally support.  When the population exceeds this number horses are gathered.  Each land management group has their own way to gather excess horses. 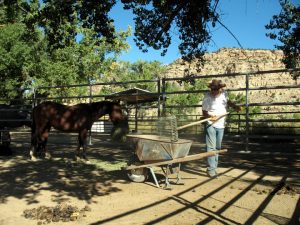 Mucking out goes with horses…half a wheelbarrow per horse.
And with about 20 horses, mules and donkeys…call in the heavy equipment.
You gotta look close but that’s me in the loader!
My boss Pat works with the National Forest Service.  The NFS contracts with trappers who gather individual bands of horses.  A band of horses can be as little as 3 horses, with a stallion, a mare and a foal to as many as 12 to 14 horses with a dominant male, lieutenant males, a matriarch mare, other mares and foals.  There are also stallion bands made up of younger male horses.  NFS gathers horses on trapping a complete band.  In our district they are taken to Farmington’s Short Term Holding Facility. 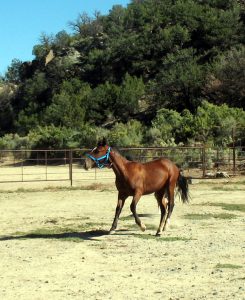 Phillip running in the yard.  What a beautiful horse.
Saturday he’s going to an adoption fair.
I’ll be so sad to say good-by.

In Farmington, the horses are examined, wormed, aged by looking at their teeth and checked for disease; the male horses are gelded.   At this point any of the horses can be adopted, but usually the horses are put into training with private trainers like Pat.  She will take four horses at a time and have as many as 12 horses in various stages of training.  USFS training goals are that they are pettable, halter trained and leadable.  Pat adds her own goals which include responding to basic voice commands like “whoa”, “walk on” and “back”, allow for the lifting of both front and rear hooves for cleaning, and trailer loading. A horse might be in training with Pat for as little as two weeks. 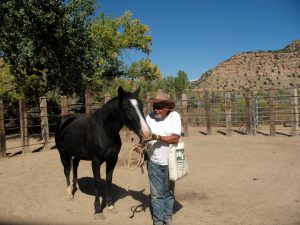 Blazette arrived the same day I did.  Her training is going well.
She’s a very pretty horse too. 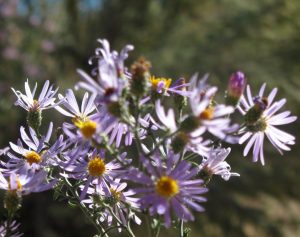 Once trained, the horses are advertised for adoption.  Horses may be adopted right out of Pat’s ranch or out of the USFS facility in Farmington.  To adopt a horse you have to have a suitable place for that horse…no barbed wire, appropriate fence height which may have to be 7 feet for the wilder ones, and the agencies would like to know that you have basic understanding of horse care.  The cost (in 2010) is $125.00 for horses under 10 years old and $25.00 for horses 10 and over.

The BLM uses a helicopter contractor to round up mustangs. The result of this is that the horses they catch may or may not be from the same band as they are pushed along. The horses run a great distance and many, especially young foals, appear to suffer injury from the process. It is this helicopter gathering that so enrages the wild horse advocates.

While in the past, surplus mustangs have been sent to slaughter houses I have found no evidence that this practice still occurs in the federally controlled herds. Some states are still sending horses to slaughter. 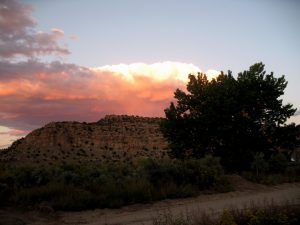 I’ve been busy this week.  Just keeping up with my chores…my part of mucking out and feeding…learning new training techniques and putting together videos of Pat’s techniques. 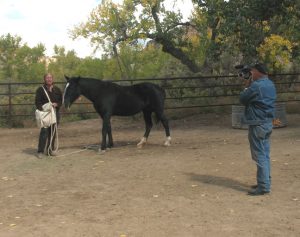 Shooting the opening of the videos

It’s lots of work and lots of fun.  Pat and John are fun to work with and Pat’s mom Audrie joined us this week, adding to the fun group. 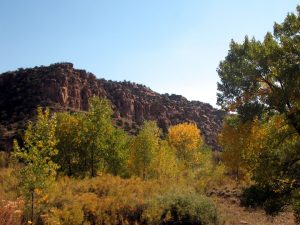